Have you been planning to invest in mobile app development but aren’t sure which cross-platform development technology fits your business needs and budget?

There are a plethora of frameworks to choose from but Flutter and React Native are the two titans of the industry. Undoubtedly, both cross-platform frameworks have their own benefits and limitations but at the same time, these fledgling technologies are leaving many of you with a big dilemma when it comes to which framework best fits your app idea.

To help you make the best decision, we have covered the answer to the most often asked questions including “What is Flutter?”, “ How it is different from React Native?”, “Who will rule the future market?”, and “ Which cross-platform app development framework is best to choose in 2021?”

Before we get started on the detailed comparison between Flutter and React Native, let’s understand why having a cross-platform application has become an urgent need for these businesses. The below image is clearly portraying how digitization is setting the new milestone for businesses all across the world. 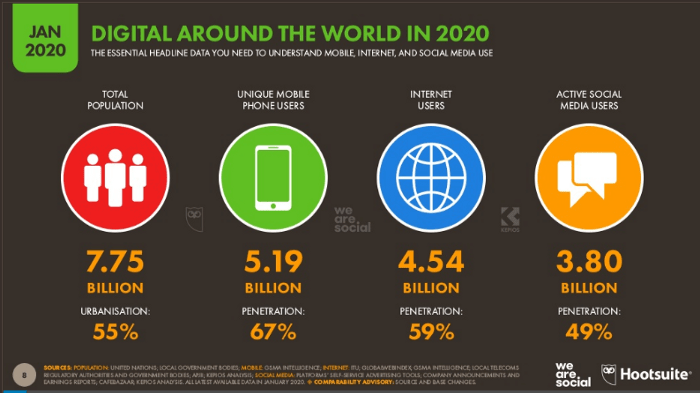 With 4.54 billion digital users in 2020 spending an average time of 6 hours and 43 minutes on the internet each day, it’s clear that the impact of digitization on our life has reached a new level. 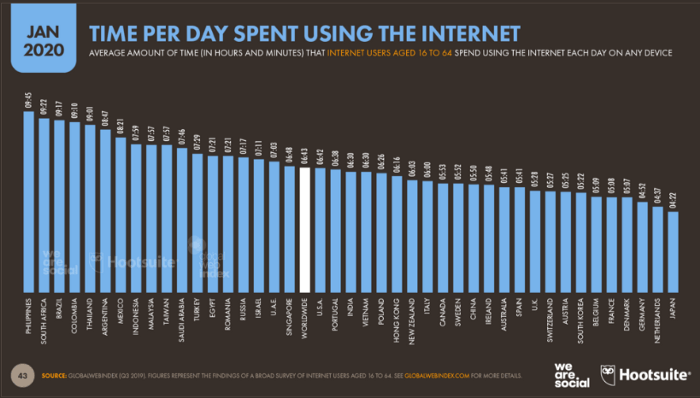 That’s not all, with each and every passing year, mobile phone users are increasing and generating the highest ratio of web traffic through mobile devices. Did you know that globally more than 5.19 billion people are using mobile phones? That’s 124 million more users than there were in 2019.

The latest data shared by GlobalWebIndex shows that people are using mobile apps to manage almost every aspect of their lives from staying in touch with friends to managing their finances to even finding soulmates.

The forecast from App Annie reports reveals that 200+ billion mobile apps were downloaded in 2019 and smartphone users had spent around 120 US Billion Dollars on mobile apps.

Now, you must be wondering why we are so much focusing on these statistics? There are two major reasons:

Well, the fact of the matter is that every survey report has some different facts and stats to tell you. On one hand, Flutter has acquired 94.9k, and React Native has 88.3k Stars. While on the other hand, as per the Statista, React Native is the top choice of cross-platform app development framework preferred by 42% of developers, where Flutter is chosen by 39% developers. 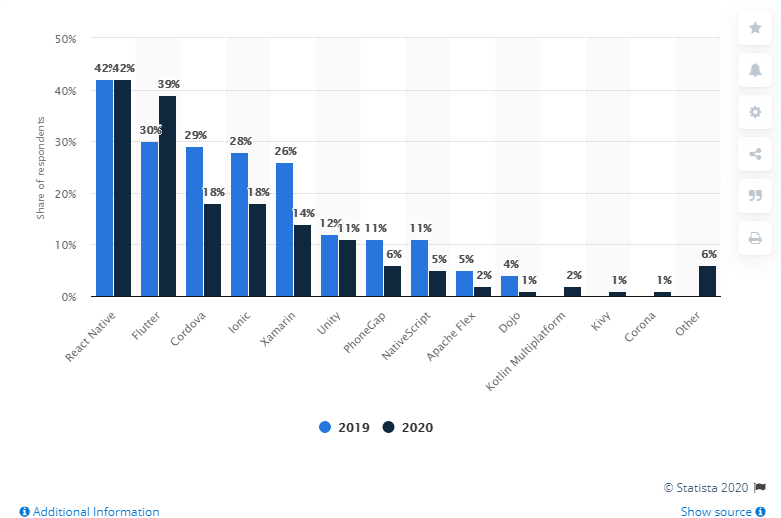 Undoubtedly, with the cutthroat competition between these two top frameworks, making a choice for the best app development framework will not be as easy as you might think. Because of this, the easy way to make a choice between these frameworks is to get deep into the comparison of Flutter vs React Native.

Overview of the Flutter React Native 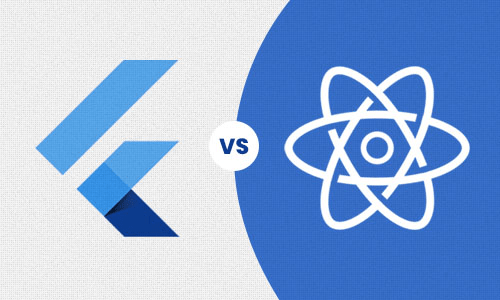 In the Nutshell: Flutter and React Native are both highly powerful, yet feature-rich, open-source frameworks. Both frameworks support the concept of one codebase for multiple operating systems (Android, iOS, Windows, and more) and ensure fast coding and bug fixing to the developers. But Flutter is Google’s baby that was launched in 2018, whereas React Native was introduced by Facebook in 2015 so there are various other things that you need to know about these frameworks.

Flutter is a popular framework developed and supported by Google that provides advanced software development kits to the developer. The idea behind Flutter is to help developers build beautiful, natively compiled applications for mobile, web, and desktop by using a single codebase. Despite being a newbie in the community, it has acquired 94.9 stars on Github and has contributed to developing the most renowned applications including the Google Ads app, the Hamilton Broadway Musical app, Alibaba, eBay, Square, and more.

React Native is a well known cross-platform framework chosen by 42% developers for app development and had the 2nd highest number of contributors in 2018. However, today it’s supported by various leading individuals and companies from all across the world including Microsoft, Expo, Callstak, and Software Mansion. If we’re talking about its popularity, it has given the world some of the most amazing applications including Facebook, Instagram, Pinterest, Uber Eats, Walmarts, Tesla, and more.

Flutter Vs React Native Comparison: Which One Is Best For Cross-Platform App Development in 2021?

Conclusion: According toGoogle trends, on an average 61% of developers are interested in Flutter whereas 81% of developers still preferred React Native for the app development.

When it comes to cross-platform app development technology trends, both the frameworks are pretty much similar in terms of popularity. Since both are young and have huge community support, therefore, both are almost equally ruling the community.

In addition, React Native was launched in 2015 and flutter in 2018, therefore React Native has a comparatively bigger community and users. On the other side, Flutter is supported by Google, so it is pretty safe to say that it will catch up to React Native very Soon. 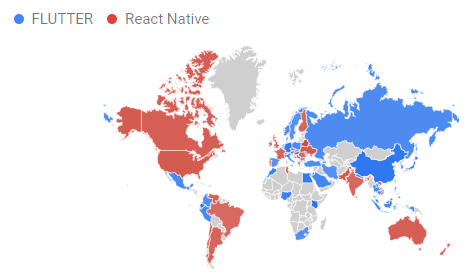 Conclusion: React Native is a more familiarized framework among developers as it is based on Javascript, whereas Flutter is based on Google’s in-house language and perfect option, to begin with, especially when you are new to the app development process.

When you hire mobile app development company, it is important to understand how proficient and expert their team is on a particular programming language.
Since React Native is already mentioned in Javascript therefore, for most developers, it is one of the most preferred software development languages whereas Flutter uses Dart, therefore it is considered as an object-oriented programming language.
In addition, as we all know, Javascript still holds its importance in modern app developments and is considered as a default language for almost every browser, that’s why many people prefer to hire react native development company.

On the other hand, Dart is an expressive and safe language to start with, this is why Flutter is frequently used for creating desktop, mobile, and web applications.

Conclusion: Flutter is comparatively a new language for developers, therefore it required additional learning efforts whereas React Native is based on JavaScript and developers are familiar with it.

As per the developer, React Native is comparatively easier to learn as Javascript is its programming language which has been around for years, therefore, a large number of developers are familiar with this language.
On the other hand, Flutter uses Dart which is comparatively newer but it doesn’t mean it’s harder to learn. Just because it is new and requires little more effort to understand the aspect of this platform, therefore developers may need to extend their learning capabilities.

Conclusion: Both technologies are easy to code and support hot reload features, but both follow different installation and configuration processes which may create a difference in productivity.

Let’s evaluate the productivity of these frameworks through three parameters:

Hot reloading is the feature that allows the app development company to make instant changes in the backend and reflect the alterations in the codes right away without even saving the file. So, both Flutter and React Native support this feature to enhance the efficiency of the developer.

Flutter uses Dart programming language which is sufficient customizing UI layout of the app and allows developers to create platforms, structural, and widgets that can be easily reused. On the other hand, React Native is similar to JavaScript that allows developers to easily separate the executed codes and styles into different classes as per the demand of the app development.

Conclusion: When it comes to evaluating the performance of these frameworks, then undoubtedly, Flutter is surely faster at coding than React Native.

When investing in mobile app development solutions, app performance is the first thing that everyone is looking for. No doubt React Native is a power-pack language but unfortunately, it is slower than Flutter. Let’s learn how…
React is made up of Native and JavaScript languages. So to extend the performance of RN, developers need to combine additional interactions with native ones like touch events, notifications, and more. But in Flutter, there is no need to combine additional OS components, which keep its performance smooth and faster.

Flutter uses Dart language and comprise of C++ which ensures boosting performance and capable of handling many issues by itself and leads to excellent User Experience (UX).

Flutter Vs React Native: Who Has Won The Battle?

Should you hire app developer or React Native Pro? If you are still looking for the winner then it is worth concluding that this detailed comparison provided merely an overview of the pros and cons of these frameworks, rather than declaring a clear winner of the battle.

In the case that you are still unsure about what framework you should consider using for your cross-platform app development needs, let’s do a quick comparison again:

Will Flutter Replace React Native in the Future?

No doubt, with the consistent improvements in Flutter SDK, this Framework is continuously refining its tools and attracting more and more companies to choose it for cross-platform app development. With the rapidly expanding community of Flutter, it will not just quickly catch up with React Native’s popularity, but also allow app development companies to create web and desktop apps.

If putting it into simple words and all it together, then it won’t be wrong to say that Flutter’s future looks promising for the toolkit as some of the leading companies like Alibaba have already started using it.

On the other hand, the supporters of React Native- Facebook are putting their efforts on large-scale re-architecture of the technology and doing their best to improve their support system for the wider community to keep providing excellent core functionalities of the framework in future as well.

Still, Flutter is a strong competitor to React Native and other frameworks, predicting the future of these frameworks is quite challenging for the developers.

Have you been planning to invest in mobile app development but aren’t sure which cross-platform development technology fits your business needs and budget?

It is worth mentioning that we have tried presenting the facts and figures of both frameworks without being biased. Our simple aim in carrying out a detailed comparison between Flutter and React Native is to help developers pick the right programming language that fits their development needs and skills.
Flutter is a strong competitor to React Native but at some points, flutter overtakes the RN and vise versa. All in all, both Flutter and React Native are the powerful options for cross-platform app development and ensuring convenient app development experience to the developers.
If you have any doubts or are stuck somewhere between these two titans and unable to decide which one you should choose for the app development, then hire a reputed software development company. The skilled and experienced developers can help you choose the right one for your business and clear your doubts right away.

Previous articleRandom Quotes - Must have item

Next article 【Complete Guide】How to Setup Stripe in WordPress